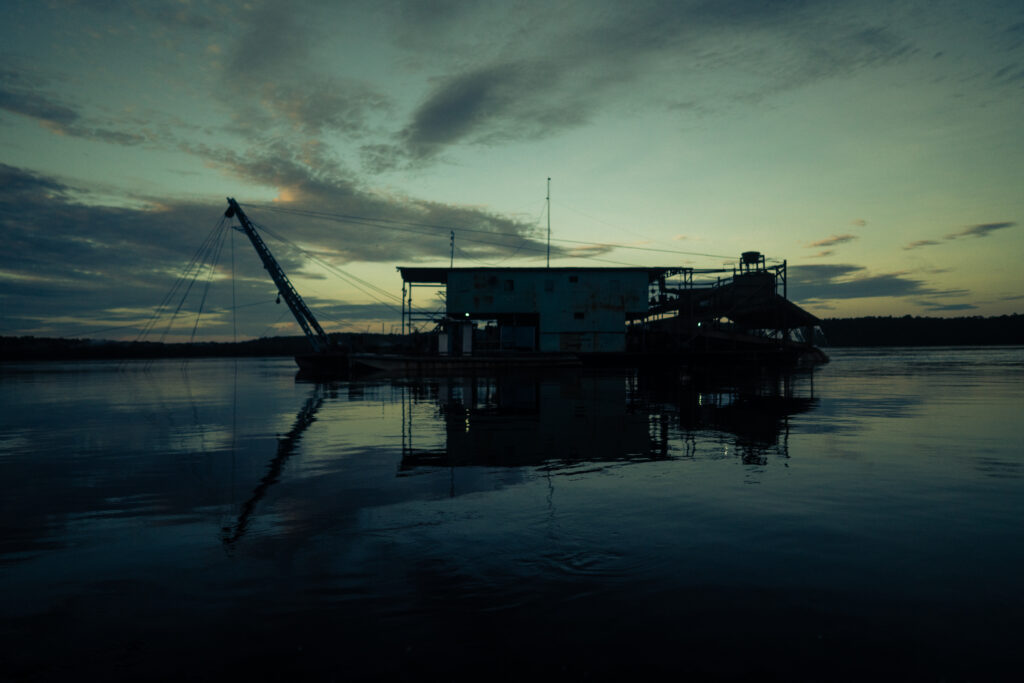 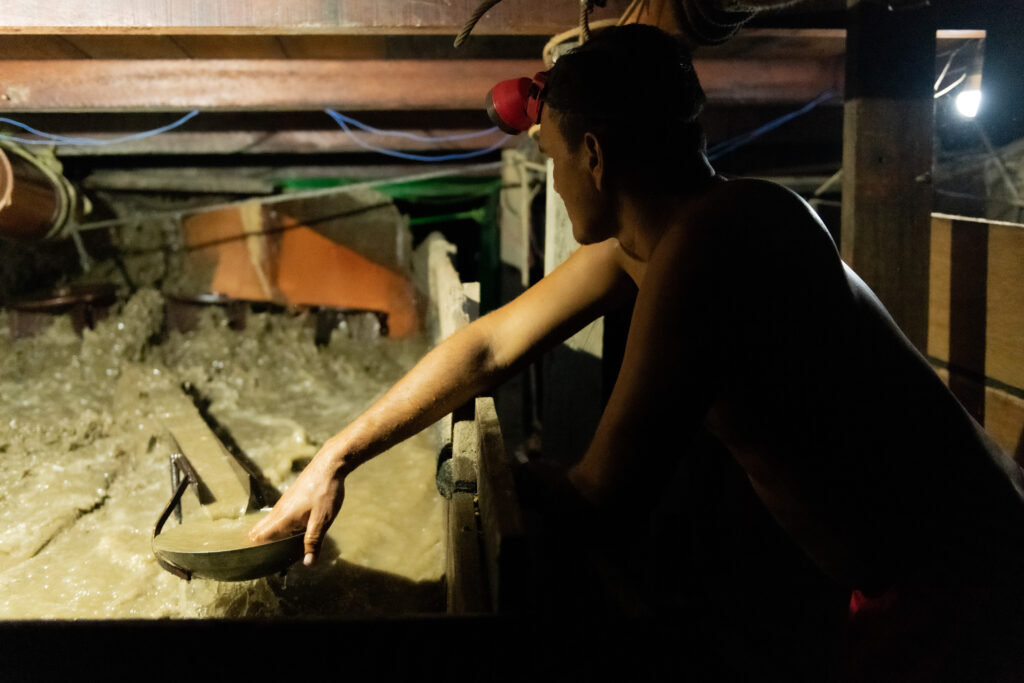 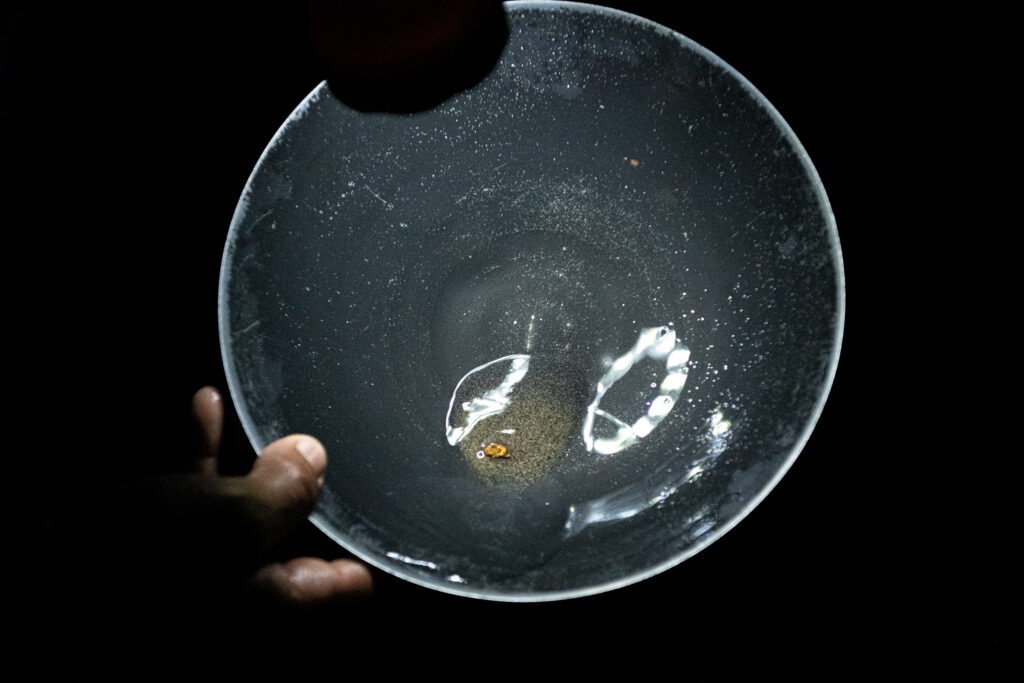 We found the garimpeiros, as the prospectors are called in Brazil, aboard one of the dredges we’d seen fleeing the river the night before.

They were joined by the operation’s owner. A young man in his thirties, he had once worked with an “old” garimpeiro on the Rondônia and Acre state borders. His former boss, seeing the young man’s dedication, offered to sell him a dredger — a great opportunity, even though he is still paying it off.

Mining dredges vary in cost, depending on barge size, and how much sediment can be pulled up per hour. Our operator tells us that dredges can cost anywhere from R$100 thousand to R$1 million (US$20k to US$200k). So lucrative is gold mining along the Madeira River, that investments there for a single dredger have reached some R$2 million (US$400k) according to a Federal Prosecutor’s Office report.

Together our operator and three men work day and night to the point of exhaustion, controlling the machines and hoses which pour sand and silt sucked from the Madeira onto a large carpet, which they then beat, extracting gold specks which they later amalgamate using toxic mercury, leaving tiny shiny coalesced gold lumps the size of a thumb tip. The  residues of discarded mercury-contaminated sediment are washed away into the river without regard for the environment or public health. 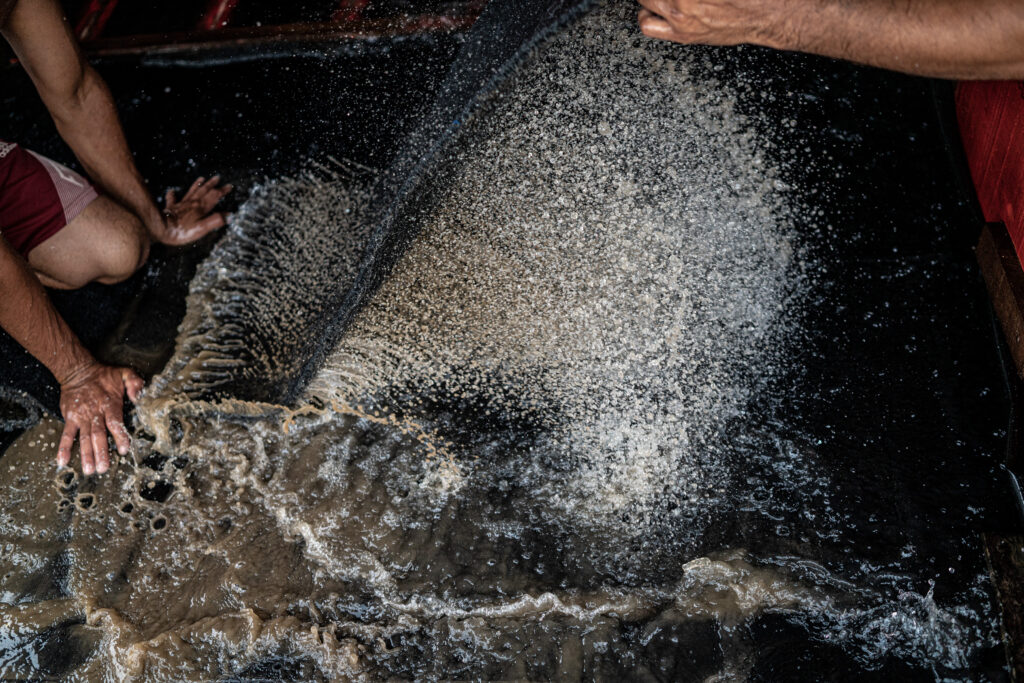 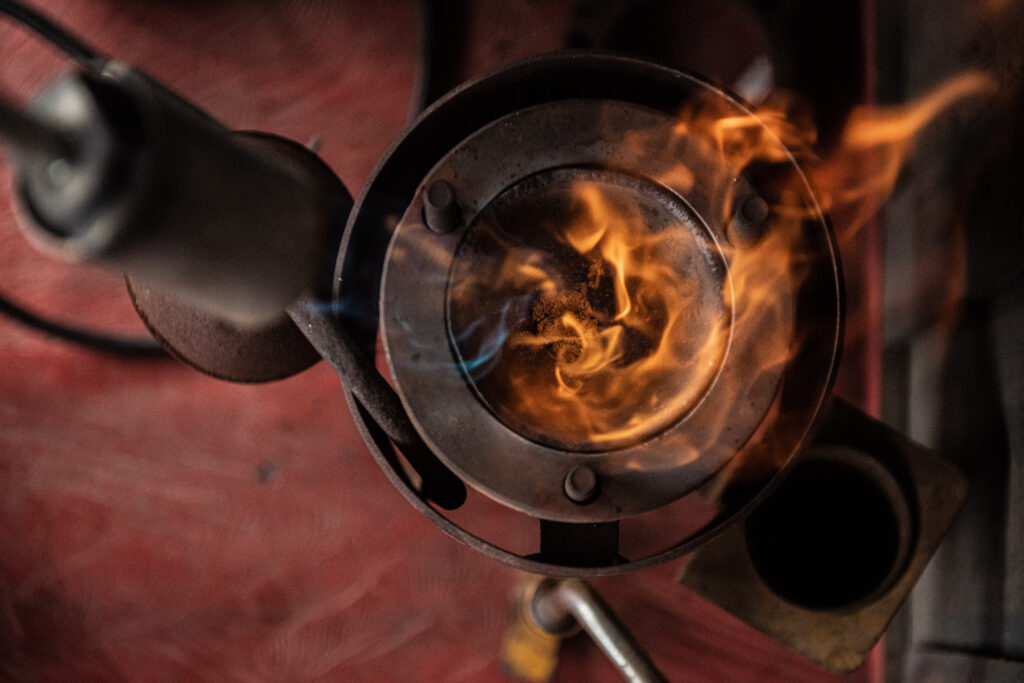 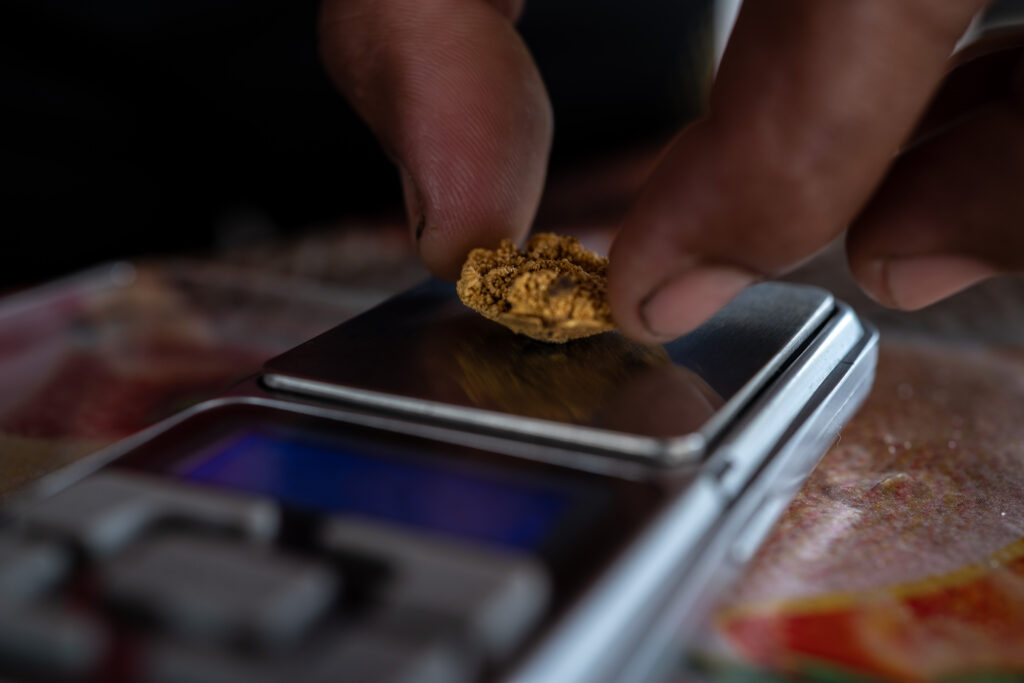 Not a romantic business

The dredge owner, expecting no patrols the next night, invited us along. Everything worked out as planned. Around 7pm, the barge’s powerful 165 horsepower engines kicked in and took us out to the middle of the river. Those same engines power the two hoses sucking up sediment. This muddy water cascades onto thick carpets which retain the heaviest sediments.

Nothing about modern-day gold mining in the Brazilian Amazon is romantic. The dredge laborers toil in an unhealthy and dangerous work environment, dominated by the deafening noise and stench of exhaust from the massive engines which burn about 100 liters (26.4 gallons) of diesel per night. The angle of the large flexible hoses (with diameters from 30-60 centimeters (roughly 12-24 inches) must be adjusted constantly. And when a hose breaks loose from a crane, a worker must jump into the dark river, dive down, and adjust attaching ropes.

Work shifts are exhausting. From the time the garimpeiros arrive in the afternoon to prepare the equipment, until the end of the cleaning process using the carpets back ashore the next morning, the men can put in a 20 hour day, most of it overnight.

As small of a profit as that may seem for so much work, the gold rush in the Brazilian Amazon continues surging. In the first four months of 2020, as the global pandemic worsened, there was a 14.9% increase in gold exports by Brazil, according to a report published by Escolhas, a Brazilian-based Institute. There is little doubt that a substantial  portion of that gold was mined illegally. That illicit gold ends up being laundered before it ultimately reaches the other end of the supply chain in the global financial market and international jewelry trade. 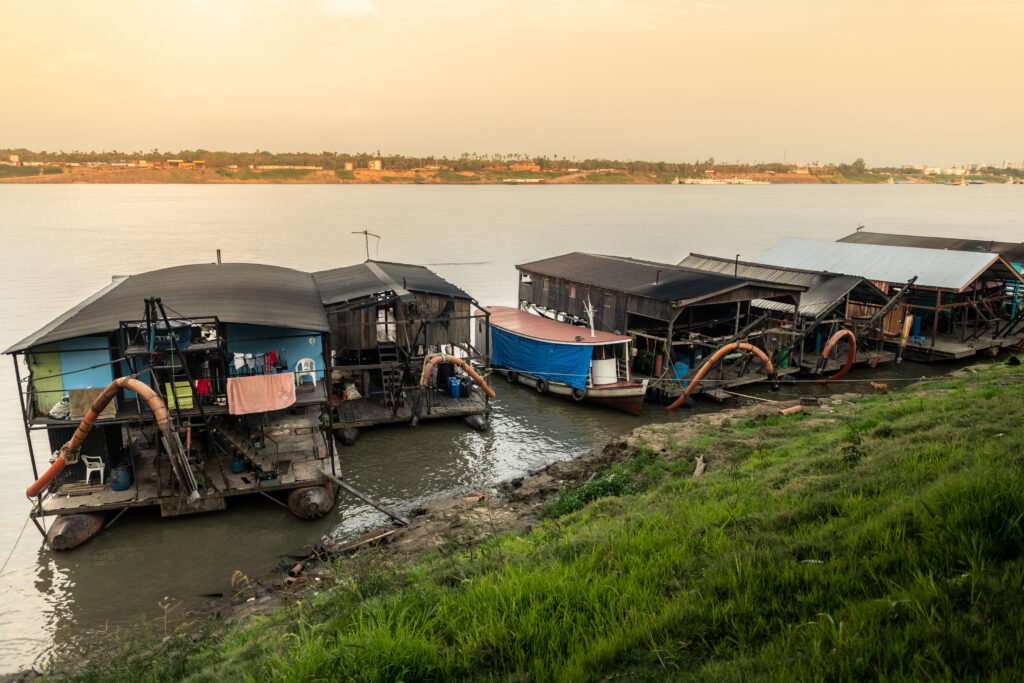 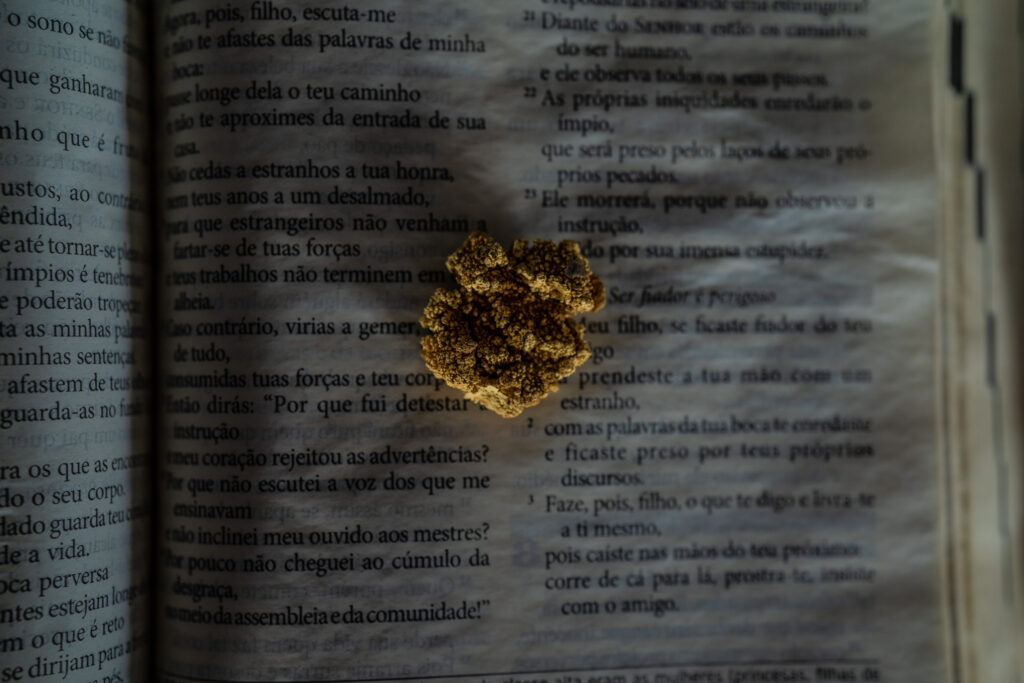